Well, it’s over. All the glory, all the drama, all the weeping people who’d just like to thank God, their parents, and Red Bull. I’m older and wiser after this Olympiad, and I’ll take this chance to share the lessons learned.

Number One: We should host next time around. 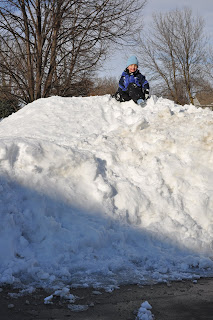 Do you see the cement at the bottom of the pile? That’s our driveway. Do you see the child at the mountain’s summit? That’s my Mitch, who would like to take up aerial skiing or snowboarding, whichever involves pizza and chicken nuggets in the winnings.

Number Two: Speed skating is too stressful for my constitution.

(I don’t remember anyone looking like these two at the Olympics, but they do have admirably feathery hair. Counts for something.) After the first night of watching Apolo Ohno and the Koreans come close to knife fights, Marc couldn’t get to sleep for two hours and I sprouted a cold sore. A SPEED SKATING COLD SORE, people. So Marc made the rule (he loves rules) of no speed skating after 9 pm Central Time.

And I mean that with all respect, by the way.

Number Three: Olympians are a rare breed. I understand that technically they are human beings, but they are a tidge crazy. The commentators cracked me up when they’d read down the litany of struggles and ailments preceding the Games. One of my favorites: “So-and-so has had a great year of skiing. You know, she blew out both knees and broke her jaw at the beginning of the season but she’s been skiing GREAT.”

I can identify because I started skiing up to my potential only after I broke my jaw and my kneecaps. And I write WAY better novels after surgery. Surgery and near-death falls on mountainsides.

Speaking of writing, my manuscript of The Next One (not its real title) is in the able hands of my brilliant editor, which is best because I have a lot of make-up laundry and dusting after the Olympics. Literature is so distracting. But don’t worry– I’ll be more focused after my jaw’s feeling better.

p.s. For those of you living in Host City Des Moines: Come to Connxions Friday, March 26, for a night out! The Sweet Life is what they’re calling it and I know COPIOUS amounts of high quality chocolate will be consumed. Also, I’m one of the speakers and I promise I won’t wear my speed skating unitard. You have my word.